by Paul B. Wiener

Librarians know better than most people how easy it is to find the answer to a question. They also know how hard the search can be. That’s because most questioners are – or believe they are – looking for the right answer to a question. Since I’ve been searching for God since at least the age of 6, I decided to use my skills to demonstrate a problem common among information professionals in a way nearly everyone could relate to. When is information the right answer? One answer to this quickly became apparent: when you ask the right person the right question. But who is that? For this study, think of “the right person” as a search engine or a search box connected to a database and to the World Wide Web. All information-gathering search engines, after all, are built by people. They scan, filter and retrieve whatever it is that other people from every walk of life all over the world have thought and documented and indexed in some way. In some way: aye, there’s the rub. Seekers may swim alone but they use different strokes in a sea of people to keep them afloat.

A poll showed that 82% of Americans believe in God (or did in , in December, 2003, said the Behavior Research Center of Arizona). The question of belief is made for polls – one could probably search for a given “do you believe” percentage among all polls! A Fox Survey said that 92% of Americans believed, in 2004. Polls must prove something, so why waste more time searching? Well, only anecdotal findings indicate how many people have actually found God. The evidence for God seems to be there, but the problem lies in translating it into terms everyone can agree on. Nothing brings this to light like a search engine. So last week I decided finally to search for God the best way I knew how. Putting a number of different databases, web sites and search engines to the ultimate test, I submitted to them, wherever the web page allowed, the ultimate question: Does God Exist? I limited the search to those three words, using quotes around them at first to maximize the likelihood of getting a focused response. In most cases the phrase without quotes would inevitably be searched for its three separate words, and that could get us off track. (I often tried this to test the search.) Most search engines don’t recognize question marks, so I left that out, relying on the positioning of the text to correspond to the uncertain nature of the information I sought. To simplify the experiment further, I listed only the first single information-bearing result that came up on the first search attempt, noting whatever else seemed interesting about the page listing that result, and adding a few comments of my own. Taken individually, I knew the first result from a single search would tell almost nothing. I was hoping, though, that taken together, across a great variety of sources, the results would tell me something I couldn’t imagine.

Does God Exist? Some would argue that that question lies behind every other question we ask, every answer that we seek – whether the answer appears as numbers, words, pictures, colors, or sounds; whether the questions are phrased in political, religious, scientific, logical, Boolean or historical terms; whether the authority sought is peer-reviewed, hearsay, traditional, oracular, podcast, rumored, tabloid, tyrannical, literary or research-centered. Surely if a humanly-constructed database or search engine that depended primarily on verbal search terms was worth its mettle – its reputation and cost, its publicity – it could provide guidance on this most elemental search, as well as insight into the quirks and surprising behaviors of search engines themselves, few of which openly declare their origins. And of course, as every librarian knows, there was the possibility of finding a definitive answer to the question. It might resolve the oldest question ever asked! Mind you, I wasn’t looking for a one word answer, though I wouldn’t have rejected one either. For what it’s worth, download the complete chart to see what happened. 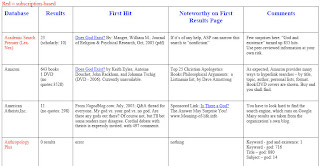 It was hard to know when to stop. But after I’d had my fun, I had to confront the inevitable: had I learned anything from this little study? Was it fair even to have expected anything new to surface? About God? About the search for God? About search engines? About the searcher? The only way I could draw conclusions, I realized, was by immediately ignoring the obvious: that all “conclusions” would be conditional, if not simply false – tainted and problematic. To say there were too many unavoidable, often unknowable, variables inherent in my search strategy is perfectly obvious: generalizing from the results might insult the human condition prompting the agony behind the search. And yet, how human it is to generalize and conclude from evidence. How human it is for librarians to depend on computing algorithms! It was as impossible to ignore the lesson as it was to ignore the variables. My experiment provided librarians who need to believe that information is sacred with evidence that, in a way, it is if you say it is. Information is also as sacred as ignorance. Try searching for ignorance. Let me try to present it as unequivocally as possible.

First, hail to the variables! A question like Does God Exist isn’t really asking for information, it’s asking for trouble. But what choice do we have? Questions like What Is Art? Is self-medication bad for you? How can we clean up the environment? Is outsourcing good? Is entrapment a legitimate way to combat sexual predation? Has the UN ceased being necessary? Is the Mona Lisa more beautiful than ? taunt reference librarians and teachers all the time. Phrasing such questions and dropping them into a search box often finds answers that have the appearance of information. Fair enough: we might call such questions prayers. What about the exact search terms: “does god exist?” Haven’t people always asked that? Doesn’t using those words exclusively, though, to blunt our doubts exclude many words that might yield better results: “existence, proof, is, Bible, real, heaven, being, truth, Allah, Jesus, creation, infinite, Yahweh, who, what and why.” Obviously. And then there’s this kink: doesn’t the notion of seeking an “authoritative” answer for our question presuppose that an authority can lie behind the Ultimate Quest? In other words, doesn’t the question put an unfair burden on an answer?

Many search engines never explain to their users how they work anyway, and few users read carefully – if ever – the Help, FAQ or About links that might tell them. Many librarians also are as ignorant of the engines they use to drive curiosity as anyone who gets in a cab on a rainy, crowded street and expects to get to a destination safely. They know the engine is there, and that it works. Moreover, as we have seen, results are often displayed in uniquely graphic and textual ways, depending on the engine, its designers, the indexing parameters available, the code language, and the foresight and empathy the programmers and publishers have for the sensitivities of the ignorant. And the scope of the database is an important variable; it is almost always changing: what journals, reports, newspapers, studies, languages, libraries, private archives, songs, personal pages, translations, records, accounts, content/site filters, keystroke entry options are left out, and are we even aware of them?

Those are just the easy variables. What about the day or month the search was done – was it 14 weeks ago or yesterday? The databases I chose to use? Because I hadn’t heard of the other ones? For this project there were at least 400 others that would have been worth searching. Are these databases ones you had to use, because of the institution or ISP you depend on? What language were you searching in – was that because it’s the only one you speak? Every language, after all, will associate search terms with linguistic concepts that, culturally speaking, may mean something only in that language. And what about the search query itself? Why “god?” Is that the only word we have for invoking a sense of what’s greater than our selves. And if god doesn’t exist, why all the fuss? Mon Dieu! Words can only do so much. “God” can be another name for the quantum physics, for intelligent design, for Shakespeare or Diogenes, for an orchid, a puppy, the concept of zero or of love, for excellence, for a perfectly-done Form 1040, a balanced budget, the shape of a snowflake, a game of baseball or Go, for the internet….Whatever we ask of a search engine, it can only work with the terms we humans give it. And only we can ascribe power to what it finds. The search engine doesn’t know, but we users always know what we meant. The information we’re seeking is already out there; but it only resembles the answer we think we’re looking for.

Is an answer or a fact the same when spoken in the language of science as it is when spoken in the language of literature or history? It’s impossible to tell from our results, but ask yourself this: does wisdom grow in literature the same way it grows in science? Of course not. Wisdom doesn’t accumulate in literature at all. Can we compare the answers to the “meaning of life” in Hamlet, Nausea and Being and Nothingness? In my little game, when I entered Does God Exist, even though I said a search engine is created by people, I wasn’t really asking a who, I was asking a what – and a what doesn’t think. A search engine is a process that symbolizes and particularizes human ignorance. All the information I found about god was already there -processed, coded, written, known, past – maybe even true. But if the truth of god were known, what would be the point of praying? Is finding god as easy as choosing information? Choosing answers is what librarians enable their patrons to do. As wide-ranging as they can be, a search engine is also a vehicle for suppressing the alternatives to every answer. But it’s possible God speaks no language that recognizes questions.

The apparent futility of my search – neither its failure nor its success proves anything – mirrors the problem many people experience who seek information online: do I know if I’m asking the right question, looking in the right place, asking the right person, asking at the right time, understanding the answer, using the right language? Can I tell the difference between information and results? Is what I’m finding even information? Is it enough? Online, almost everything that can be described can be found; everything competes for truth, and all the authorities compete for pole position. Information may be easy to find, but search engines don’t deal in truth. If I found God, would I know it? God’s existence belongs to a long list of truisms that can never be turned into phenomena, like pornography is unhealthy, technology is evidence of progress, history repeats itself, all men are created equal, rape is not about sex, father knows best, there is a smallest particle of matter, knowledge is power? These intuitions and observations are never based on repeatable evidence, but the results of a search engine query often are – and often aren’t. God does exist online: the proof is in the algorithms. That will have to do for now.