The Music Library has an impressive collection of music manuscript facsimiles, including sketchbooks of Beethoven and autographs of Mozart’s works, such as his Don Giovanni and his string quartets.  Complete works anthologies include the Bach-Gesellschafte and Neue Bach Ausgabe, which were frequently consulted throughout the years of Stony Brook’s annual Bach Aria Festival. Other notable complete works editions include Le Opere di Giuseppe Verdi (Ser. 1, v. 18a, Il trovatore, was edited by the SUNY Stony Brook Chair, David Lawton).

This wholly musical manuscript consists of 170 folios.  Two monks from Silos discovered the codex in 1904.  The binding is of wooden boards a centimetre thick covered in white leather.  A 14th century parchment flyleaf at the beginning is unnumbered and contains fragments of two plainsong Glorias.  There is a mixture of score and part notation, so that the red five-line staves amount to six per page in score but usually seven, eight or even nine in parts.  The notation is measured throughout, though the presence of minim tails is always due to a later hand. The main part of the manuscript is was written by one hand, while the fragment in Ars Nova notation on folio 8 was certainly due to a slightly later hand.  Angles distinguishes 11 further hands from f. 153 to the end.  Whoever was the main copyist, Johannes Rodrigues, whose name appears several times in the margin near the end, was evidently one of the later compilers and editors.  The codex seems to have been in the possession of the monastery from the beginning, for there are conductus written for the founder of Las Huelgas, Alfonso VIII, and abbess Maria Gonzalez.  The remarkable collection of liturgical music in Las Huelgas covers most of the forms popular from the 11th century to the early 14th century, organa, motets and conductus of the most varied kind, though the total of 186 compositions listed by Angles includes many monodies and some pieces without musical notation.

Florence, Biblioteca medicea laurenziana, Med.Pal.87 (Codex Squarcialupi), 216 parchment fly-leaves at the front, and 5 modern paper fly-leaves (3 at the front, 2 at the back).  18 gatherings of 3 to 10 bifolia each.  Possibly all in one hand, or in two to three very similar hands.  Date and provenance 1415-1419 (von Fischer) or not before 1440 (Pirotta); from Florence:  the miniatures were certainly produced at the Florentine monastery of S Maria degli  Angeli, the MS was perhaps compiled by Paolo da Firenze  (von Fischer); it was in the possession of Antonio Squarcialupi in the 15th century, passed thereafter presumably to his son and thence certainly via his uncle R. Bonamici to giuliano Medici (1512-13) and from there to the Biblioteca Medicea Laurenziana.

Composers:  the pieces are arranged in chronological order by composer:  Giovanni da Cascia (12), Jacopo da Bologna (28), Gherardello da Firenze (16), Vincenzo da Rimini (6), Lorenzo da Firenze (17), Donato da Cascia (15), Niccolo da Perugia (36), Bartolino da Padova (37), Landini (146), Egidius and Guilielmo de Francia (5 in all), Zacar (7), Andreas de Florentia (29); 16 folios have been left blank to accommodate the music of Paolo da Firenze between Lorenzo and Donato, and 23 folios for that of Jovannes Horganista de Florentia at the end.  A portrait of each composer appears with the ascription of his works.

Date and provenance:  1173, Arnaldus de Monte, monk of Ripoll, made a copy in Santiago.

All of the item, with polyphony, was in Santiago by 1173.  It is considered one of the most remarkable books known to musicology.

Book 4: Book of the pseudo-Turpin

Book 5: description of the roads to Santiago

A 12th century parchment manuscript meas. 295 x 210 and containing 196 folios.  This volume contains sermons and liturgical offices in honor of St. James (book 1), miracles of St. James (book II), an account of the translation of St. James from Jerusalem to Galicia (book III), and a guide for the pilgrim (book V).  The notation is Aquitanian.  As in the St. Martial sources, the polyphony is usually on two staves divided by a wavy red line.  The twelve staves per page are divided into six systems, and bar-lines simplify the reading of the score notation. 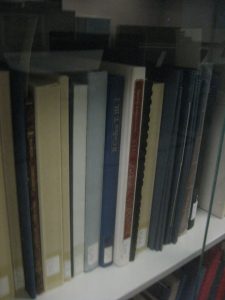 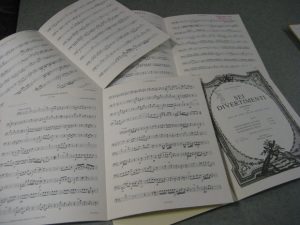 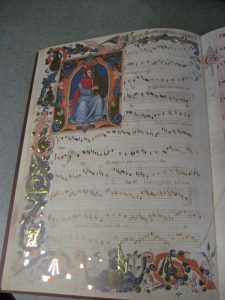